This article is a stub. You can help Yowamushi Pedal Go!! Wiki by expanding it.

Kyofushi is not a team that attacks on day 1 of major competitions because they tend to conserve energy that day, however, Midousuji would take over on day 2, often threatening to drop riders before checkpoints from day 2 onwards, and have little regard for teamwork by then.

Midousuji started the trend of shaving his hair to a flat buzzcut, a common hairstyle in men serving in military, in year 1, so he insisted everybody to do so before Day 3 of the 42 Inter High, which was his idea to improve aerodynamics.

Due to similar colour scheme to Kumamoto Daiichi, they are able to create confusion on Day 2 of the 42nd Inter High. 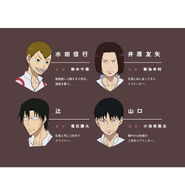