View source
watch 01:36
We're Getting Mutants in the MCU - The Loop
Do you like this video?
Play Sound

The Hakone Academy Bicycle Racing Club (shortened to Hakone Academy, or "Hakogaku") is a bicycle team that represents Hakone Academy. Founded by Juichi's Father, Hakone is known for having a formidable strength after winning consecutives inter highs and being called the "kings". As its stated by many characters during the series, Hakone Academy's cycling club is the largest in the country and every member who becomes a regular is considered an ace.

Because of its large number of members, the team has an incredibly difficult selection process and all the club members race against each other in a system of brackets divided by six groups (A, B, C, D, E and F.). The winner of each bracket becomes a regular member and wins the right to participate of the Inter High.

Club members from first-years and second-years are often shown announcing their year and last name when entering the club room; it is possible that with a club that large, this could simply be more practical than trying to remember who everyone is. Riders are not only ranked in class, but also abilities from A-D. They have promotion-relegation races each month, while the team captains are often all-rounders or climbers, as sprinters often can't issue instructions at the end of the race.

They had an alternate-colored kit, where the blue was darker and much of the text on the arms and legs were dark red.

The club consists of one large building located on the school grounds, behind the class buildings. It has a wide lot to allow for parking cars and several bikes. The club building and school are possibly away from where the dorms are, as Arakita is seen riding some distance to the club when he stays at the school dorms.

Inside the club building there is a large area for using rollers to warm up on, which also contains several weight-training equipment as well as a locker room. It's possible that there are several locker rooms: there's been some discrepancies between the anime and manga, and within the anime canon itself, whether or not the locker room used by Hakone Academy's Inter High team opens directly to the outdoors or to a hallway within the building. The locker room contains several awards on the wall and green benches to rest on.

The team has also been seen using an extremely large indoor track to ride on. 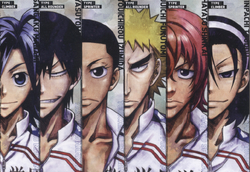 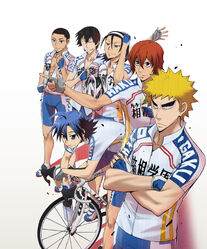 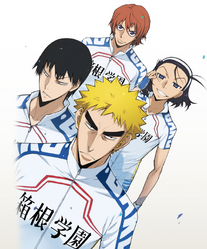