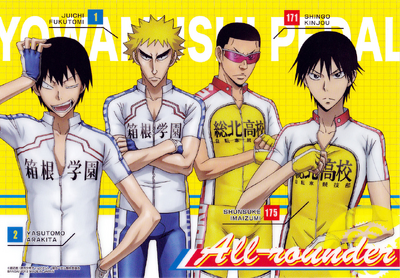 An all-rounder (or Rouleur in French) is a racing cyclist who excels in both climbing and time trialing, and may also be a decent sprinter. In stage races, an all-rounder is likely to place well in the General classification. All-rounders are usually Team Leaders in both stage races and classics cycle races.[1]

In the series, all-rounders are portrayed as being proficient on both flat and mountainous land. They usually let the sprinting and climbing experts compete for their respective checkpoints at the Inter High, saving their energy for the final goal at the end of the day's race. The "ace assistants," those who pull the ace along when approaching the final goal, are usually all-rounders as well.

All-rounders can start off as a specialist (such as Naruko, who begins as a sprinter), and are portrayed slightly better at sprinting than climbing, except for Ashikiba Takuto, who started off as a climber, but became an all-rounder in year three. In the mobile game, they have higher stamina and lower sprint speeds than sprinters.